An order of PCBs from iTead Studio Just arrived, and so far I am very happy with the results. 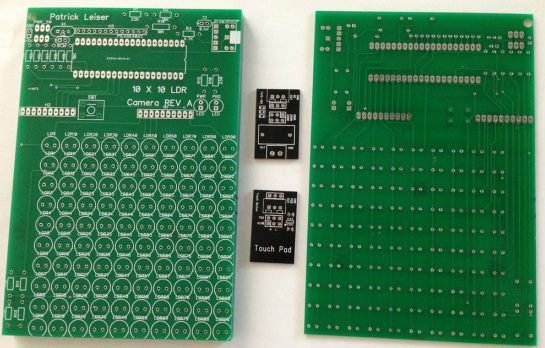 The PCBs recived from iTead Studio left: top of board; right: bottom of board; middle: two open source boards designed by someone else, included for free.
In case you are unfamiliar with PCB fabrication services, basically you send the a design (a .gbr file) to them and they make and send you a completed PCB (Printed Circuit Board). iTead studio and seeed studio have some of the cheapest PCB fabrication services available at only $10 for ten 5x5 cm (1.9 inch) PCBs (let me know if you find anything cheaper) I chose iTead rather than Seeed because they give you two open source PCBs designed by someone else (black PCBs above) with your order (and I found them first).

I read this review of iTead vs Seeed vs Osh Park and was expecting the PCB from iTead or Seeed to be relatively low quality.
However the PCBs are beautiful, and, as far as I can tell error free! (other than my errors  ;)
I ordered the PCBs on July 16, 2013, and they arrived on August 1st, 2013, only taking 15 days! (despite some reviews saying shipping took 30 days)
By: Patrick Leiser